Drop-in centres available through the Toronto District School Board (LOVE these! Click on your location.)

Early Years Centres (Toronto locations at the bottom of the page)

Aside from baby-gazing and the other 99 things that our daughter kept me busy with ove the past nine months, I checked some pretty good accomplishments off my own bucket list. As you will see from this list of 5 very important things.

(NOTE: This list may only appear even mildly impressive to people with babies)

1. Finally watched Showgirls
A movie in which Jessie Spano dances the same way as she did on Saved By the Bell! Except with even more flailing, and naked, and with tranny make up on!  So awkward it hurts. And yet… I watched on…

2. Knit half a scarf
Once, I was artsy crafty. I made throw pillows, did cut and paste, made montages and decoupages and even painted. Like, on canvas. Yeah those days are behind me, as confirmed by my beautiful, perfect, half-knit scarf.

3. Learned how to braise and deglaze
But I do cook! I cook often and well, and during mat leave I discovered soooo many wonderful things to do in the kitchen. It all started when we traded in (read: Craigslisted) our All Clad for Le Creuset. This decision changed… everything. In such a good way. That and watching Chopped for the last few years gave me the courage to deglaze. I’m not going to go into detail here, but damn, I can make a retardedly good gravy now.

4. Reactivated my library card
I stopped using the library many years ago, mainly because I had racked up so many late fees that they wouldn’t let me use my card. Kind of a shame – and yes, I should have paid up. But I guess my account was dormant long enough that they just forgot about me. Voila! Brand new patron with a fresh start! (This time around, I promise to put my due dates in my calendar.)

5. Sorta kinda finished my novel. And sorta kinda got a literary agent.
This one is serious… and I’m actually really proud of myself. Before Raquel was born I met with an agent, hoping that over coffee I could get him to bite on the novel that had been in my bottom drawer for quite some time. I went because I wanted my daughter to know that I’m a writer – an author – and that I didn’t give up on my dream. I didn’t think my novel was the greatest thing ever, but I knew that it had potential and that I couldn’t let it go. Lo and behold my agent Sam Hiyate thought it was good, and we’ve been working together on revisions ever since. Hopefully nearing completion now, which will mean that he tries to SELL MY NOVELLLLLLLLLLL. It’s the best feeling. Ever. And I am a firm believer that babies need parents who follow their dreams. Or at least nurture them.

So that’s all I’ve got for now! Below are a few other mat leave pointers for you lucky ducks starting out on the mat leave journey:

Don’t be fooled by that Groundhog Day feeling…

Whether its a bad day or a blissful one, these days are numbered. Not just by time, but by baby’s development. The beautiful day that we walked an hour each way to Sunnyside Pavillion for lunch I thought we’d do that walk 100 times before the end of summer. I thought the same thing about the day we got ice cream at White Squirrel and ate it in Trinity Bellwooods park. But time passes, the season changes, and baby changes, and soon you’re into the next phase or the next season. Each more amazing than the next!

Take baby-free time in different ways
I think my first baby-free event was a 20 minute drive to Shopper’s Drug Mart during which I laughed, cried, and generally acted like a basket case. Our first date night was sort of similar. We were like two cracked out zombies, twitching and having panic attacks while trying to ‘relax’ and be ‘romantic’. The beginning was hard, but important. What I found over time though was that I also needed home-alone time, out with girls time, jog time, yoga time, shop time. Each gives you back a different part of yourself I think….

Don’t nap when the baby naps.
I mean, you can, but…  it doesn’t even help, so why bother? I did try to nap about once a week, and that helped. But most of the time I just drank a lot of coffee, and wrote, and cooked, and read. I think no matter much I would have napped, I would have still been tired…. (I’m still tired now.) 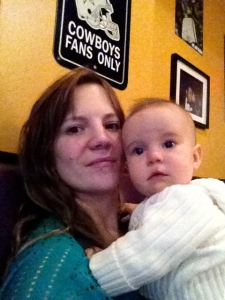 Back to work this monday, folks… wish us luck!

be inspired to greatness

A prettier life made easier for you
Cheap and Cheerful Chow

The finest technology, entertainment and life source on the web

Because in MY life, these things are no small potatoes

Inspiration and Recipes for Growing Families

midnight memoirs of a not so sane mummy

Tips, Tricks, and Talking Points on Love, Marriage, the Baby Carriage (and Everything Else In-Between) | DC Counseling & Therapy Services